August seems like forever ago now, but once upon a time, Doug and I traveled to Slovenia, Croatia, and Bosnia for two adventure-filled weeks. 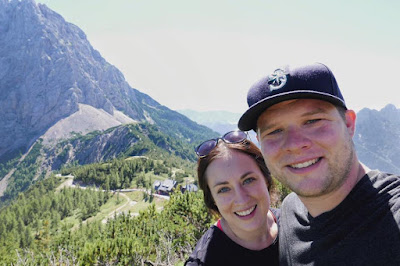 We chose The Balkans because we wanted to go somewhere in Europe that neither of us had been to before, which left most of Western Europe out of contention. Doug had been trying to convince me to go to Croatia for awhile ("It's where all the Europeans vacation!") and it turns out that my mom's side of the family is most likely part Slovenian, so former Yugoslavia for the win! 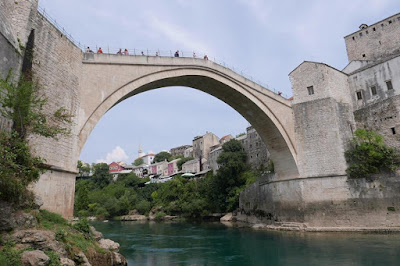 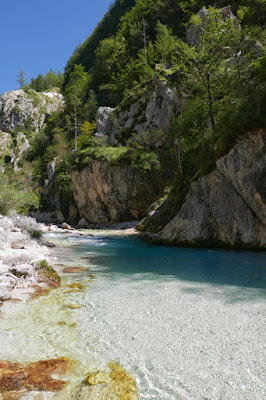 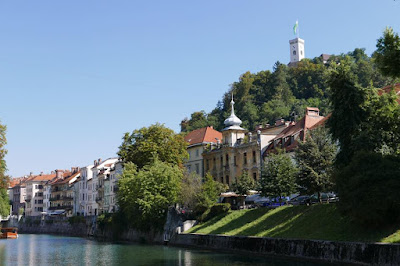 As usual, Doug took the reins when it came to planning, and he did a great job. Our full itinerary is at the end of this post, but here's some general observations and information about favorite cities/stops too:

Language Barrier
We had absolutely no problem communicating with locals in Slovenia and Croatia as most people spoke English. As our good buddy Rick Steves pointed out in our trusty travel guide, Slovene and Croatian are spoken by a very small number of people, so Yugoslavians understand that it's very unlikely that you'll know their language as tourists. We did not have the same luck with English-speakers in Bosnia, but we were only there for one day and we made it work. 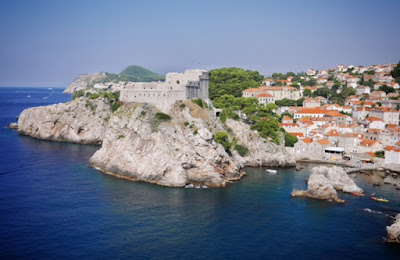 Food
Our last two big trips were to Spain and Thailand, two countries that made it very easy to indulge in our food-loving tendencies. Before we left, we had read that The Balkans are not necessarily known for their food culture, but I would say we ate pretty darn well during our trip. Slovenian and Croatian cuisines both have an Italian influence so yes, I did eat gelato everyday. In the north, truffles are very popular, so I had a lot of very good truffled pastas, and in the coastal towns we ate some delicious seafood. Bosnia offered a taste of Middle Eastern fare with kebabs and burek. 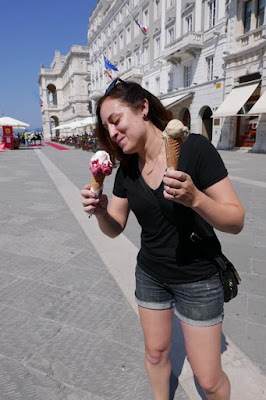 Drinks
Slovenia and Croatia are hopping on the micro-brew train with varying degrees of success, but at least Doug had plenty of beer to drink. We also loved that we were back in a place were drinking radlers at all hours of the day is quite acceptable. The Balkans actually have a big wine region too so I had quite a few good reds and rosés during our trip. Our biggest fail drinking-wise actually came in Sarajevo, where the nightlife consists of drinking Bosnian coffee and smoking hookah rather than gathering over beer and wine. That night we really needed a drink (you'll see why shortly), so the lack of bars was not appreciated. 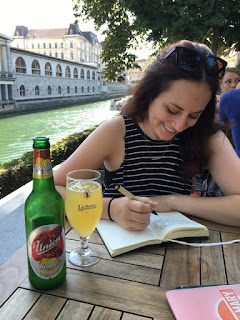 Transportation
This trip was our first time renting a car and aside from an incident on the steep, twisty streets of Sarajevo, it worked out great. We weren't bound by train schedules and it was so nice to be able to just throw our luggage in the trunk and head out to our next destination. 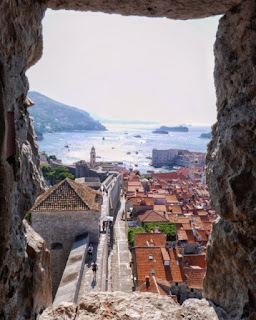 Lodging
We've had issues connecting with AirBnB hosts abroad before, but on this trip, problems getting into our apartments were the rule, not the exception. The main issue is that we were only using WiFi, so if our hosts contacted us with a change of plans while we were en route, we didn't get that message until after we had arrived in the city, realized something was wrong, and eventually found a cafe to check the app. Not the most efficient or calming method of arriving in a new place! Apparently AT&T offers a good overseas plan, so we will definitely look into that next time so we don't do things like driving around Sarajevo for four hours (hence the need for a drink referenced above).

History
I'll admit that prior to this trip, I knew very little about this part of the world other than that there were devastating wars there in the 90s. After this trip, I feel like I've learned a lot, but also that I've only started to break the surface of the history of The Balkans in general and the wars of the 90s specifically. 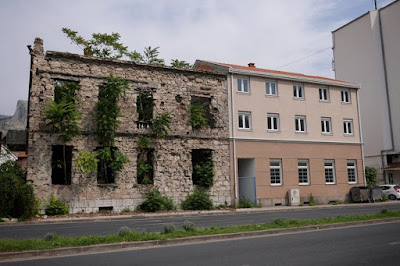 Most of the cities and towns that we visited have rebuilt in the last three decades, with the exception of Mostar and Sarajevo in Bosnia. While it's wonderful to see beautiful Ljubljana and stunning Dubrovnik, I'm glad we also experienced the less-polished side of this part of the world. It's easy to forget how many lost their lives so recently, and seeing bombed out buildings and walls speckled with bullet holes in Bosnia really drove home the recent tragedy that The Balkans endured.

Cultural Disparities
At this point, Doug and I have traveled enough that you'd think we would know we can't expect the same level of service in restaurants abroad as we do in Portland. Regardless, Slovenia and Croatia were kind of brutal for us when it came to ordering and asking for the check. We hate having to aggressively flag servers down- especially servers that seem to be going out of their way to ignore you- but that's exactly what we had to do everywhere we went. It became exhausting after awhile but there's not much we could do about it!

Lake Bled (Slovenia)
Visiting Lake Bled is like entering into a real life fairy-tale. A stunningly blue lake surrounds a beautiful church on an island with the Alps in the background. We hiked around the lake, enjoyed a delicious lunch of pasta, went for a swim, rode summer toboggans, and took way too many pictures. Highly, highly recommend this spot. 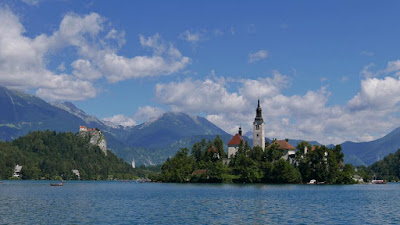 Julian Alps (Slovenia)
A close second to our day at Lake Bled was our day trip through the Julian Alps. We hiked to the beautiful Peričnik Waterfalls, visited Vršič Pass, and got a little dizzy on the 51-switchback road through the scenic Soča Valley. 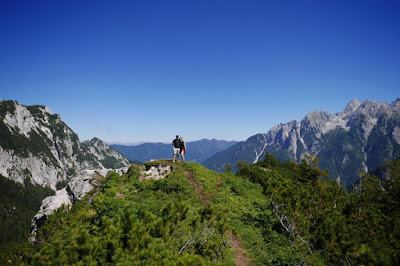 Ljubljana (Slovenia)
Ljubljana served as our jumping off point for our trips to Lake Bled and Julian Alps and it was the perfect place to come back to every night as Old Town has a seemingly endless amount of cute cafes up and down the The Ljubljanica River. 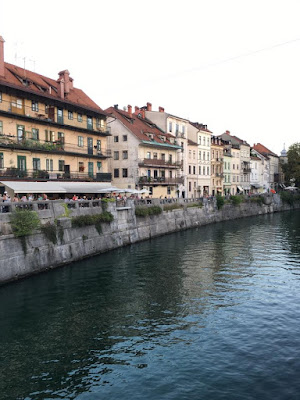 Split (Croatia)
I knew the Croatian coast was going to be touristy, but I think I had convinced myself that Eastern European-touristy is not as bad as Western European-touristy. Wrong. The old towns in Dubrovnik and Rovinj, though both beautiful and not without many of their own merits, were also crawling with tourists. That's why Doug and I liked Split so much. Old Town Split is situated in Roman Emperor Diocletian's crumbling palace, which has resulted in narrow, winding streets that reveal a fun bar, boutique, or cafe at every turn. The locals seem to hang out in this Old Town more too, which made the city seem more authentic than Dubrovnik and Rovinj. 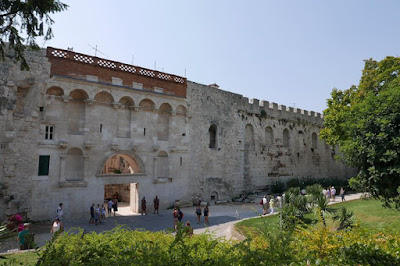 Zagreb (Croatia)
We didn't mean to spend so much time in Zagreb, but thanks to a faulty airplane engine (Doug: "My last social media post was about you so I can die without worry."), we were granted an extra day to explore Croatia's capital city. We especially enjoyed Tkalciceva street, which is lined with stores and restaurants and was a great place for people watching day and night. 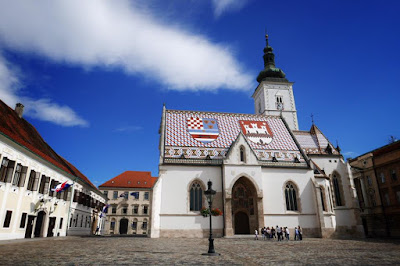