Good news: Doug and I got a puppy! 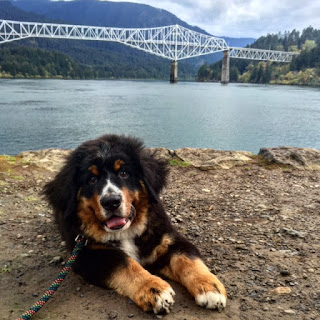 Bad news: The puppy is ruining our lives.

I mean, not really... but he is seriously messing with our sleep schedules, our cat, and our ability to ever get out of the house without going somewhere dog-friendly.

I think that's why our one night out in Brooklyn last month was especially fun. It also could have been because we were introduced to a glorious new style of pizza.

But let's backtrack a bit first. Doug and I were flying into JFK for Sarah and Chris's wedding in Connecticut and since it would also be our anniversary weekend, Doug had the foresight to suggest going a day early and spending the night in Brooklyn. Best idea ever!

Our main goal was to hit up Torst, which Doug had really, really wanted to visit during our New York trip last Christmas but which ended up being a bit too out of the way during our East Village-focused trip.

We did end up making it to Torst this trip, but the highlight of our night was definitely our impromptu dinner at Emmy Squared.

Emmy Squared is the little sister restaurant to the much-acclaimed Emily but while Emily focuses on Neapolitan wood-fired pizza, Emmy Squared is all about Detroit-style pizza. (If you want to read the super cute story of Emily/Emmy Squared's pizza-obsessed husband and wife team, you can do that here).

Here are the hallmarks of Detroit-style pizza:
It's really the crust that makes this pizza. The dough is baked with the cheese resulting in a delicious, crispy, caramelized, cheesy crust. So good. 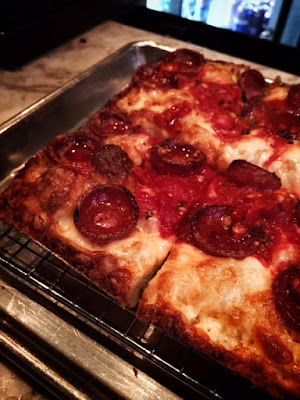 We opted for the Roni Supreme ($19) during our visit, made with lots of pepperoni (the good, thick kind that curls up around the edges) and Calabrian chili.

We also split the Caesar Salad ($12) and I had a Moscow Mule ($12), which were decent, but who cares about lettuce and pedestrian cocktails when there's pizza to be had? Okay, here's some photos anyway: 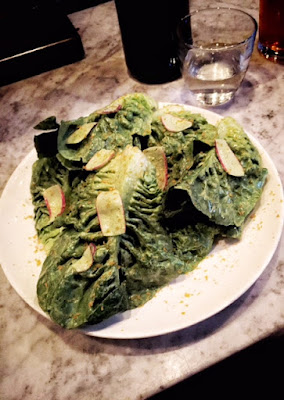 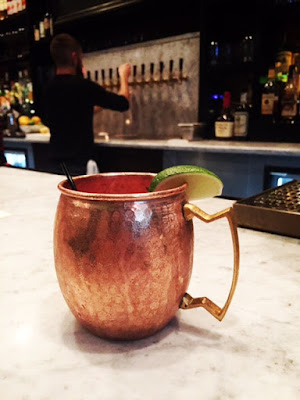 Later that night, over beers at Torst, Doug and I desperately Googled "detroit-style pizza Portland" with no luck. From our research, unless you're actually in Detroit, the only well-regarded, dedicated Detroit-style pizzas joints are Via 313 in Austin, Blue Pan Pizza in Denver, Loui Loui's in Louisville, Pizza Squared in Tampa, and Emmy Squared.

Hey Portland, can you get on this ASAP?

Seriously though. We'd come to a Detroit-style pizza place even if you don't allow dogs.

Want to learn more about Detroit-style pizza? These articles from Eater and Food Republic were the most informative.
Posted by Katie @ Happy Hour Honeys at 11:32 AM