Earlier this month, Kel was contacted by the folks at Portland Seafood Company about coming in for a special media preview of their menu. She couldn't make it, so I went instead. Lucky me! Portland Seafood Company prepared quite the feast for us AND gave me to opportunity to hob nob with some Real Life Print Media Food Writers (my idols!). And by hob nob, I mean sit quietly while trying to absorb all their food knowledge. Anyway...

My visit started off with a tour of the restaurant. Portland Seafood Company (which from now on will be referred to as PSC because typing is annoying) is located in the building that formerly housed Newport Seafood Grill. 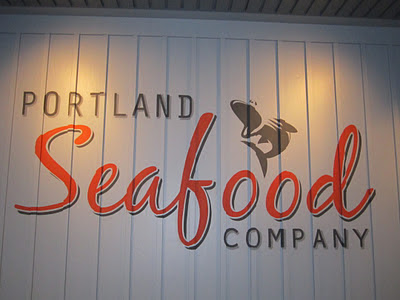 The decor is nautical but in a completely non-cheesy way. Casual elegance, you might say. 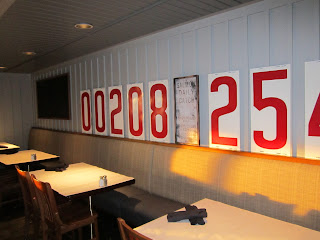 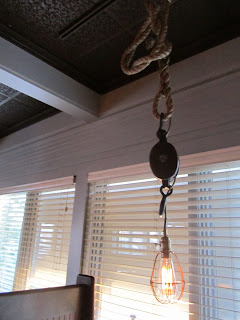 Here's our table at the bar. These communal tables will be great for the afterwork crowd. 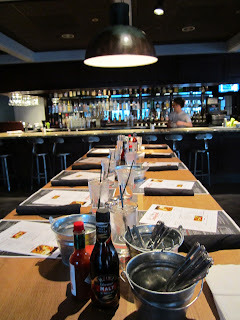 But enough about that. On to the good stuff: the food!

Chef Brian Poor is the Culinary Director over at Portland City Grill as well as at PSC and he came out to tell us all about the restaurant's "happy fish" philosophy. PSC only uses sustainable, high-quality seafood that are rated as a "Best Choice" or better by the Seafood Watch Program at Monterey Bay Aquarium. PSC also encourages diners to ask where their meal came from. Whether you're dining on Penn Cove oysters or Atlantic Quahog clams, they're happy to share specifics.

Ok, so we know it's sustainable and the fish are "happy", but how do they taste?

Looking at my notes (professional status!), I think we probably sampled around 20 dishes that night. Here are the dishes I took notes on and/or photographed in order of preference. Get ready to drool a little. And then feel bad for my waistline because yes, I did eat ALL that fried seafood. And some of Kelly's leftover mac & cheese later that night. And then I didn't run the next morning. Cuz I never do. Oops. 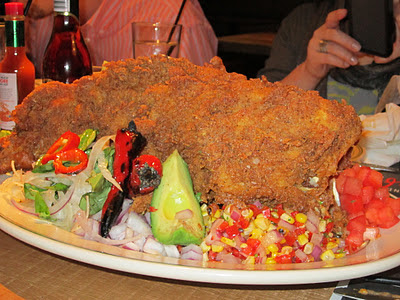 Check out this baby. That's a whole Fried Rockfish, fried crispy and served with warm tortillas, avocado, red onion, and red jalapenos and topped with a spicy jalapeño-ranch sauce. It's pretty much DIY fish tacos and since I found this to be the most flavorful of the fried fish I tried that night, it gets the top spot on my list. Grab some coworkers, some local beers and this guy and you're good to go. 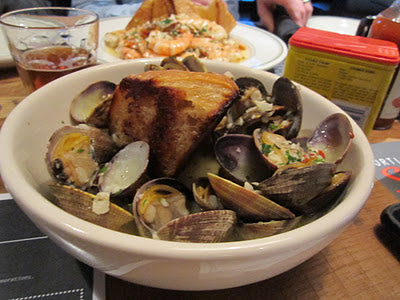 These are Steamed Manila Clams ($11.99) with basil, garlic, white wine and thyme, served with sourdough bread from Portland French Bakery. So simple, so delicious. And that bread dipped in the leftover sauce. My god. 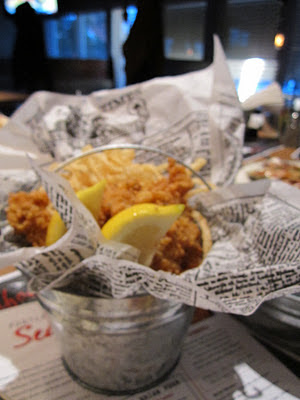 This was meant to be a photo of The World's Best Fried Clam Strips ($7.99) but I think it's actually a Spicy Popcorn Shrimp Bucket ($8.99). Anyway, a big deal was made about the clam strips and for good reason. They were quite tasty. Can't comment on the "World's Best" part though cuz it's the first time I had them. But Chef Brian did say: "I'm old, I've eaten a lot. These are the best." Okay then. 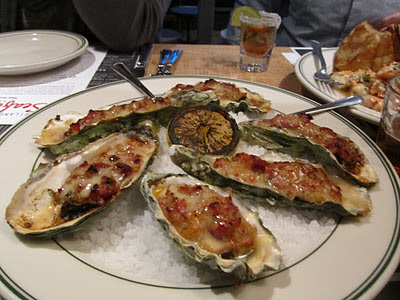 Last year, Erica made oyster stuffing for Thanksgiving and it was so repellent that I vowed never to eat oysters again. But these Oven Roasted Freshly Shucked Pacific Oysters ($13.99) had bacon and bell peppers and parmesan cheese and butter baked into them sooo... I ate three of them. And they were awesome. 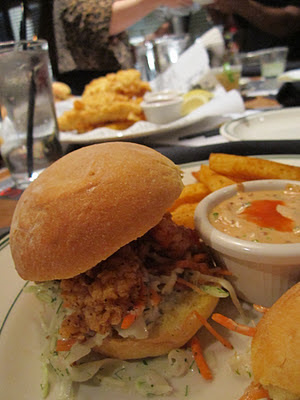 When this Shrimp Po'Boy ($8.99) (served as sliders for us) came out, I was reaching my food limit. So full. But then the shrimp was so nice and crispy and Chef Brian's "mom's slaw" was super flavorful so I ate a whole slider. But no Old Bay-seasoned fries. Even though they looked really good. 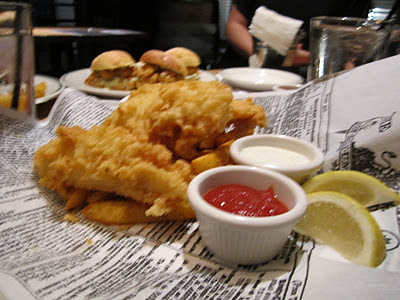 As you can see, by the time I got to the Fish & Chips ($7.99-$16.99), my food coma was such that I did not even care if my photos were fuzzy. So keep that in mind when I tell you that even though I really, really wanted to like PSC's fish & chips, I didn't. I don't even know why. Probably don't listen to me and order them anyway. Everything else was delicious, why wouldn't these be? 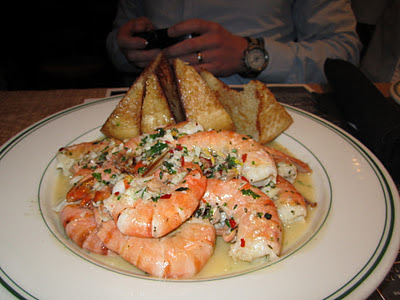 Here are Steamed Peel & Eat Gulf Shrimp ($11.99) with butter, garlic and parsley. And bread. The Real Life Print Media Food Writer next to me commented that she was surprised at PSC's choice to leave the legs on the shrimp. Having not often encountered peel & eat shrimp with legs, I was surprised as well. 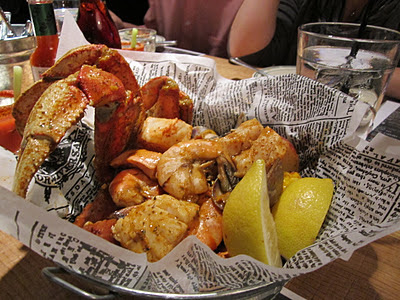 Crab Bucket ($24.99). Sufficiently crab-buckety, gross andouille sausage and all. Sorry, not a fan of andouille. 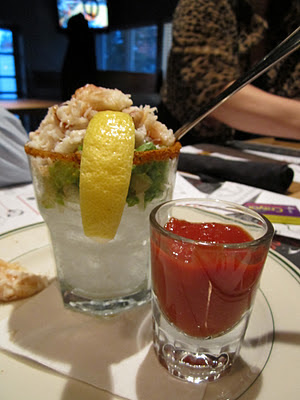 Oh, wait! We should also talk about drinks. And drink-ish things. 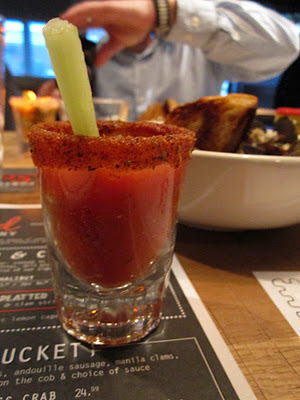 This Bloody Mary Oyster Shooter ($2.50) was good. (At least the The Real Life Print Media Food Writer next to me said so. I've never had a Bloody Mary before- shameful, I know. ) 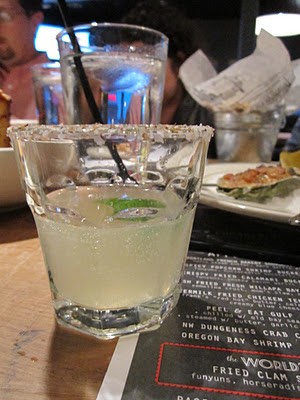 This Margarita ($7) was not. More lime please.


[PRETEND THERE IS A PHOTO OF AN OYSTER SHOOTER HERE]

This Oyster Shooter ($2.50) with spicy tequila and lime was good. This Lavender Cosmo ($1) was not. Super sweet on the front, unpleasantly bitter on the back. 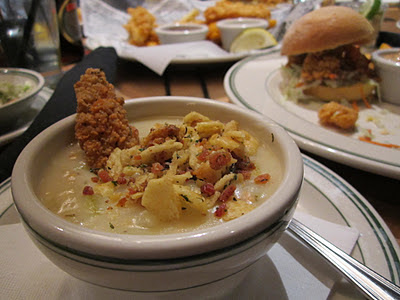 Super creamy. Plus they have tableside bacon bread crumb service, so yeah. Don't know what they've got floating in there cuz I was too full to care.