So this thing happens where sometimes (or usually), Doug forgets that he lives in Portland and likes to plan weekend activities in Seattle. That means that I've been going up to Seattle a lot too. I've made the trip up there about three times in the last month and a half or so.

Of course, I can't really complain. Seattle is an amazing city and Doug has been doing a great job of showing me around. (I'll note here that Doug is of the mindset that Seattle is superior to PDX. He is wrong. But that's for another post...)

My first visit to Seattle started with a beer tour around downtown guided by Doug's friend Matt. You can find out more about the tour, put on by Seattle By Foot, here. I won't go into specifics but I'd highly recommend it if you like beer and random historical facts.

Since we stayed with Doug's parents in Port Orchard, my visit also included some happy hours in nearby towns. Silver City Brewery in Silverdale and Tides Tavern in Gig Harbor are both favorites of Doug's family. Silver City has a great selection of beers (Fat Scotch Ale and Whoop Pass double IPA are Doug's recommendations) and Tide's Tavern has a great view from their patio.

My favorite day of my visit, however, was our day spent in Seattle for a Mariners/Sounders double header.

We decided to forgo lunch purchased at Safeco Field in favor of bringing our own sandwiches from Salumi, another Franz family favorite. 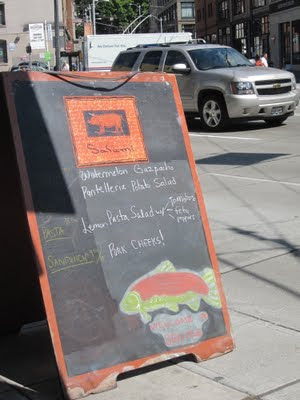 Salumi Artisan Cured Meats is a small storefront belonging to the Batali family (yep, Mario's relatives) that sells salami and cured meat products as well as sandwiches and weekly soup and pasta specials. 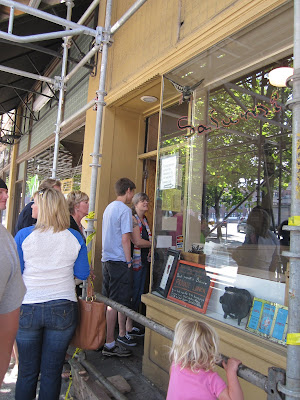 There's usually a line wrapped around the corner. 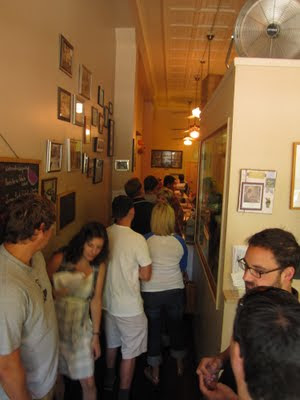 While they do have a large room in the back that you can reserve for specially catered meals, Salumi is pretty small, so plan on grabbing your sandwich to go. 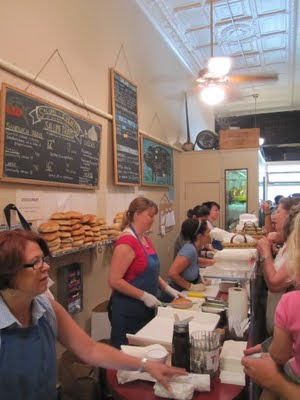 The day we were there, Salumi was featuring three types of salami:
- Salumi Salami (the house salami made with a touch of ginger)
- Mole (spiced with chocolate, cinnamon, ancho and chipotle peppers)
- Wine

After doing a bit of sampling, I opted for a sandwich with wine salami, though the mole was a close second choice. 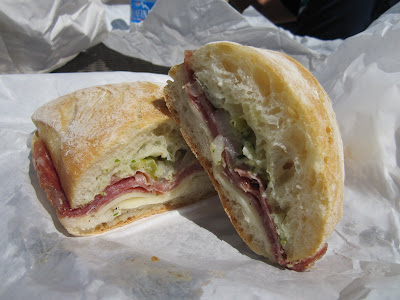 Salumi stacks their sandwiches with sweet peppers and onions, a parsley & capers spread, a garlic spread, provolone or mozzarella (if you want it) and, of course, salami. So flavorful and delicious!

Doug opted for the special sandwich of the day: Pork Cheeks. 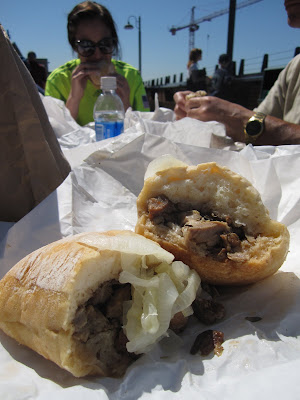 Like me chowing down in the background? Anyway, this sandwich was super tasty, but pork cheeks are a little too fatty for my taste. A bite or two was all I needed.

Following the Mariners game, we had a few hours to kill before the Sounders game started. Doug and his friends are Sounders season ticket holders so their pre-game drinking rituals are pretty well set. Often they'll begin at Pike Brewing Company (which was also a stop on Matt's pub crawl.)

Pike Brewing Company offers around 13 different beers, all brewed on location. You can learn about them here. My favorite is Naughty Nelly, an American Pale Ale named for Nellie Curtis, madam of the LaSalle Hotel where Pike was founded.

Pike also offers a full menu, though the only thing I've ever had on my multiple visits are the nachos which come topped with pepper jack and cheddar cheeses, black bean corn salsa, tomatoes, green onions, jalapenos and your choice of chicken, pork or veggie patties tossed in Pike BBQ sauce. 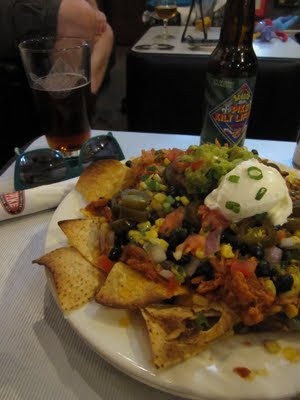 They're the perfect accompaniment to a pitcher (or two).

Stay tuned for more about my Seattle trips including drinks at the celebrated Moshi Moshi and Seattle's best Chinese food!
Posted by Katie @ Happy Hour Honeys at 11:03 AM