Katie came to visit this last weekend to go to the Bite of Oregon, return to a couple of Portland happy hours, shop at Ether, eat some fro yo, but mostly to see me I like to think! So after a fun night on the town... 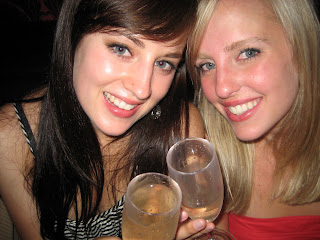 ...and a couple days of recovery, we headed to a new happy hour together before having to take Katie to the airport.

Bernie's Southern Bistro, located on NE Alberta and 29th, specializes in southern cuisine and offers a great $3 happy hour menu. In addition to all the food being a mere $3, there are six drink specials for just $5 each. We started with Mojitos, then moved to Margaritas, which we preferred and probably would have continued with if we didn't have somewhere to go. 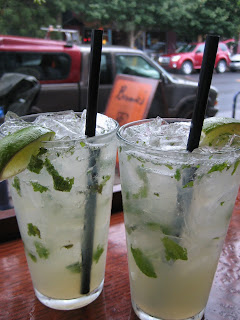 For food we decided to order four items, after all they're only $3 and it was Katie's last day. Of course we ordered their mac'n cheese and sweet potato fries. The mac was creamy, decadent, and delightful, while the sweet potato fries were crisp and spicy, not Mint's but still good! 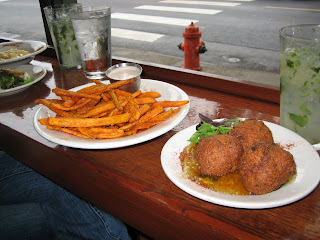 To really get our southern fix, instead of ordering the po' boy, meatloaf sandwich, or fried dill pickles, we chose to order fried green tomatoes and hush puppies. The hush puppies were basically fried cornbread with a marmalade sauce and the fried green tomatoes were exactly what they sound like, and happened to be surprisingly enjoyable. Served with a creamy, spicy sauce they were my second favorite, coming in just after the mac. 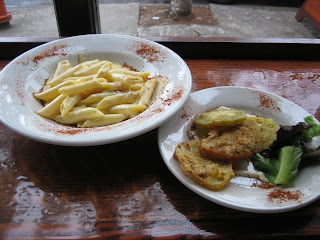 If at the end of your meal you're itching for something more, perhaps some dessert, don't worry because there is a banana fosters on the happy hour menu to satisfy your sweet tooth. Though Katie and I just opted for a second order of mac'n cheese! We would definitely recommend checking out this affordable and delicious happy hour!
Posted by Kelly at 1:15 PM