Happy hours are apparently few and far between in San Jose, but such is not the case in San Francisco, thank god. Doug and Rachel (shout out to one of our few known readers) were in the city for a few days so we decided to go to happy hour before hitting up a Giants game.

Doug and Rachel chose Bacar, a swanky restaurant about halfway between their apartment in Union Square and AT&T Park. In an unusual happy hour move (at least for kel and me), we each chose our own dish. Rachel went with the goat cheese dip ($5), Doug chose the sliders with grilled onion and jack cheese ($5.50) and I decided on the flatbread and hummus with olive oil & sea salt ($4). The flatbread and hummus was my favorite and it would definitely be a great choice for sharing with others as Bacar does not skimp on the flatbread. Doug and I also decided to forgo fancy drinks for $2 PBRs. Again, not the usual, but it seemed more appropriate for pre-baseball game drinking. 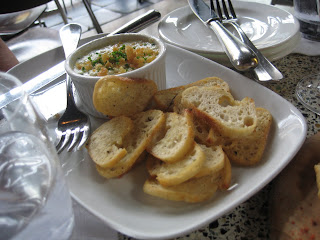 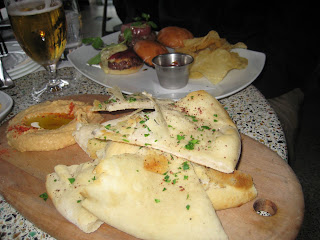 While I was writing this post, my friend Lindsey reminded me of a happy hour worthy of mention, even if Kel and I visited there almost a year ago. That is 540's $1 well-drinks on Mondays from 10pm-2am. Cheap drinks, fun crowd, do it.
Posted by Kelly at 10:43 PM