In Doug's ongoing quest to try to make me switch my allegiance from The Rose City to the Emerald one (p.s. it ain't gonna happen), he's done a great job of introducing me to some of Seattle's smaller neighborhoods that I hadn't previously visited.

A few weekends ago, we began our day in Seattle with a trip to Red Mill Burgers, a Seattle institution.

The original Red Mill opened in 1937 and was located in Capitol Hill. That location closed in 1967 but in 1994, a new Red Mill was opened in Phinney Ridge. 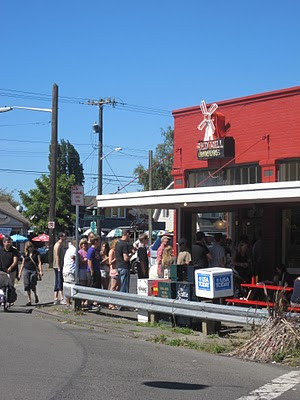 Even though Red Mill reopened over 15 years ago, lines are still out the door on weekends. That's how good their burgers are.

Why so good? Well, it might have something to do with the bacon... 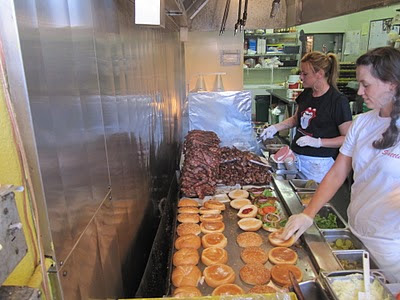 Yeah, those are stacks and stacks of it. 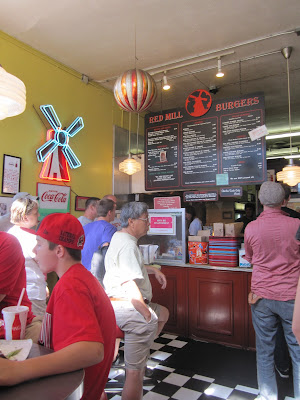 Doug and I patiently waited our turn in line and then took our burgers to-go so we could enjoy them here: 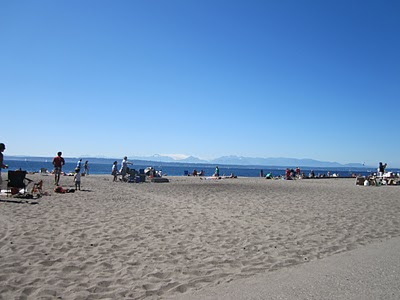 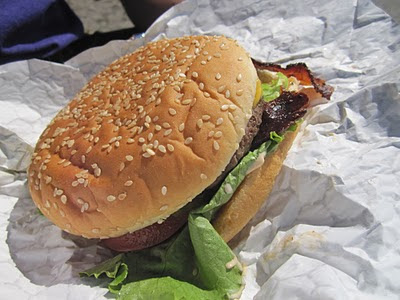 You can't tell from the photo, but these burgers are huge. And very delicious.

I chose the Verde Burger with comes with fire-roasted Anaheim peppers, jack cheese, lettuce, tomato, red onion (none for me), and Mill sauce. 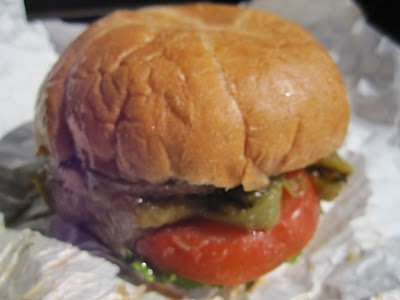 I've been a burger purist (bun, meat, and ketchup only) for most of my life and have only recently taken to lettuce, tomatoes and sauce on my burgers, so stepping out of my comfort zone with the Verde Burger was kind of a risk... but it definitely paid off.

This in one of the best burgers I've had in quite some time (yeah, looking at you $20 Craigie on Main burger). I'll definitely be back.

After we had our fill of sun at the beach, Doug and I headed to the Fremont area to hit up Fremont Brewing Company, one of Doug's favorite beer spots in the city.

Fremont Brewing is cool because their "urban beer garden" sits right in the middle of their brewery. And there's free pretzels- always a plus in my book. 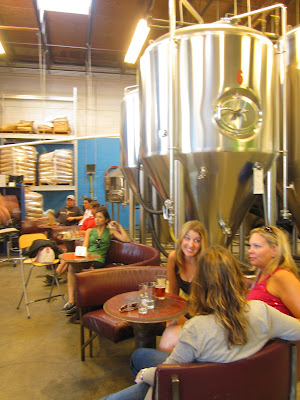 Doug and I opted for samplers. 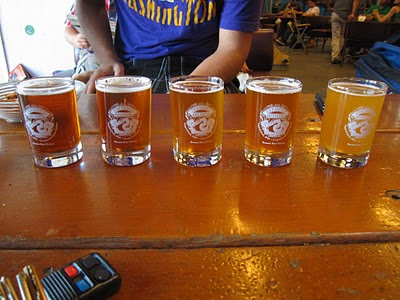 I might have gotten in trouble for arranging our beers by color for the sake of this photo... and not remembering their original order. But hey, Doug claims to be pretty good at identifying beers by taste so it wasn't really that big of a deal...

On our way to the brewery, I had spotted a little pie shop called, fittingly, Pie, so of course I had to check it out after we left the brewery. (Side note: Have you also heard rumblings that pie is the new cupcake?  I hope it's true. Pie is obviously infinitely more delicious.) 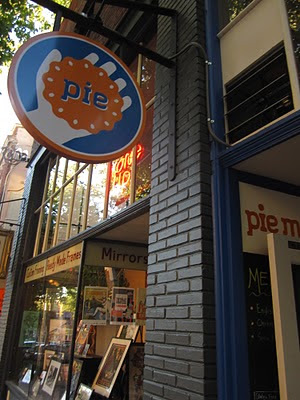 There, we picked up three mini-mini pies for $4. We chose berry, apple and keylime. 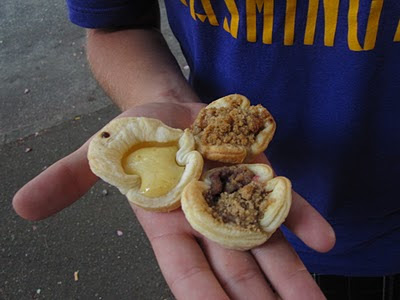 The berry was in trouble to begin with because Doug's mom is the absolute queen of blackberry pies and it's hard for any pie to compete... but Pie's berry was pretty decent. I definitely prefered the keylime to the berry though and the apple was my favorite of the three.

Pie also makes savory pies so maybe give those a try too.

Our next stop of the day was Moshi Moshi, a sushi place located in Ballard, another cute little Seattle neighborhood. 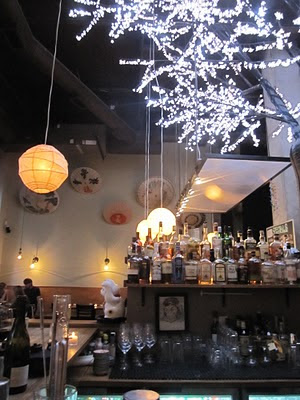 Moshi Moshi may be a sushi restaurant but they are actually better known for their craft cocktails. Their cocktail list reminded me a lot of Eastern Standard in Boston, another cocktail mecca.

For his cocktail, Doug ordered Death Poem ($12) made with Guatemalan rum, rye, grapefruit, lemon, Aperol, cinnamon bark syrup, and an orange twist. He loved it. I'm not a huge fan of rum so it wasn't my favorite. 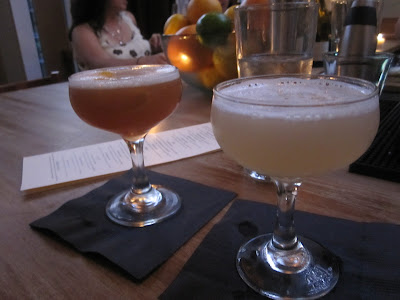 I chose Mary Pickford (London Edition) ($10) made with gin, pineapple gum, lime, maraschino, and house grenadine. It reminded me a lot of my go-to cocktail at Eastern Standard, Aviation, so I liked it quite a bit.

I also liked that while Moshi Moshi certainly does use what some might call pretentious ingredients, they tone down the snob factor by including a glossary of ingredients on the back of their cocktail menu. 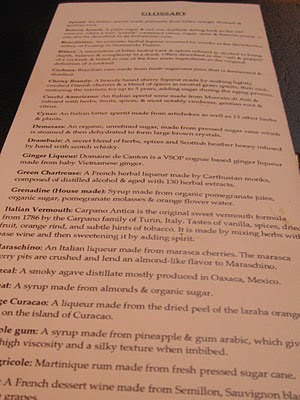 Surprisingly enough (given all the food we'd already eaten that day), after drinks at Moshi Moshi, Doug and I were ready for a late dinner.

La Carta de Oaxoca is Doug's favorite Mexican spot in Seattle and I can see why. La Carta serves traditional Oaxocan cuisine and they serve it well. Very well, in fact. 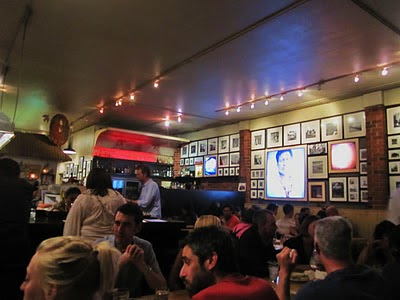 We started off with an order of chips and guacamole with salsas from the salsa bar. 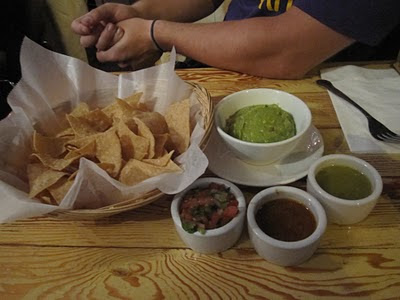 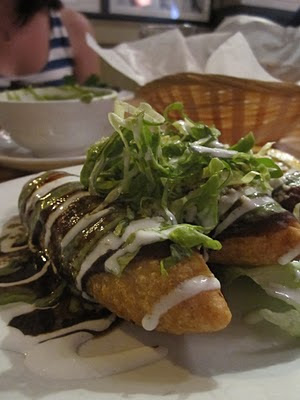 They were just as good as they sound. I would order them for myself in a heart beat.

My usual order at Mexican restaurants is a side of rice and beans with tortillas. It may sound odd, but I'm a firm believer that if a Mexican restaurant can't do those three things really well, they have no business serving any food.

But... I decided to break out of my mold and try La Carta's specialty: Mole Negra Oaxaqueno made with black chile mole with chicken or pork (I chose pork) and served with white rice and tortillas. 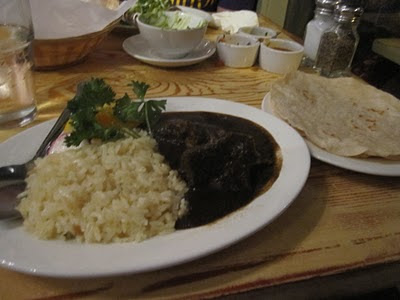 Now I'm no expert on mole (you'd have to go to my dad for that) but this was delicious. Mole has a lot of strong flavors in it (chiles, chocolate, garlic, etc.) and they were balanced perfectly in this sauce. Great fresh tortillas too. Dad, if we ever get you and Mom up to Seattle, we're going here for sure.