The roomie and I have been talking about taking advantage of all the travel opportunities around the East Coast since we moved here, but we didn't manage to actually get it together and go somewhere until a few weekends ago when we headed for D.C.

Before departing, I mentioned our trip to my friend Miranda and she offered to ask her friend Timothy of LA Meets DC for suggestions. We followed Timothy's recommendations closely and, let me tell you, the guy knows what he's talking about. We had a great weekend and ate some great food. Thanks again, Timothy!

On to the good stuff. Literally. 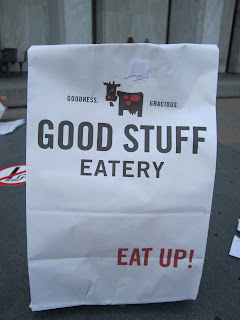 Shan and took the bus down late Thursday night and arrived in D.C. on Friday, just in time to meet up with Shannon's friend Brad for lunch at Good Stuff Eatery. 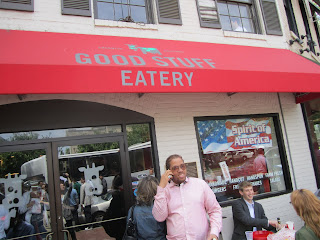 Do you remember Spike from Top Chef Season 4? Yeah, this is his burger place. He also owns the pizza place right next door, We, The Pizza. 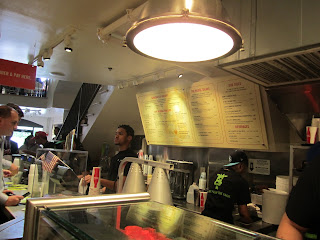 Good Stuff has counter service only, which I was a little surprised about at first, but it works. For all the people crowded in there during lunch hour, we were able to order and get our food relatively quickly. It's also pretty cheap. 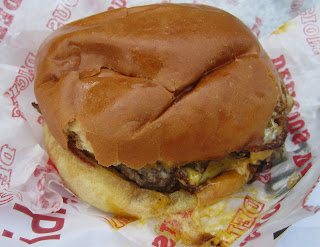 On Brad's recommendation, I ordered Spike's Sunnyside with cheese, applewood bacon, and a fried egg on a brioche bun with good stuff sauce and "lotsa napkins" ($6.89). 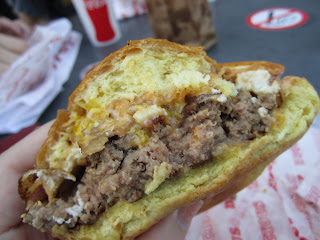 The burger was very rich what with the brioche bun and fried egg plus bacon and cheese but since it was on the smaller side (a good thing in this case), I had no qualms about gobbling the whole thing right up. Would definitely recommend this one. Delicious. 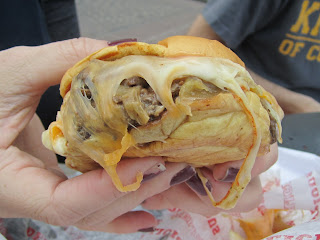 I'm not a huge fan of mushrooms so this wasn't my favorite but it was still pretty tasty. Shannon did agree though that the Sunnyside was better. So maybe just get that one.

And, because I can never resist french fries, especially when they're rosemary fries, we also ordered Spike's Village Fries topped with fresh thyme, rosemary & sea salt ($3.79). 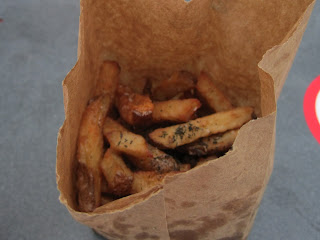 These were good, but we didn't really have any room left for them after we finished our burgers. Oh well.

After lunch, it was off for some site-seeing before hitting up the (surprisingly happening) bar scene in Arlington. Fun! 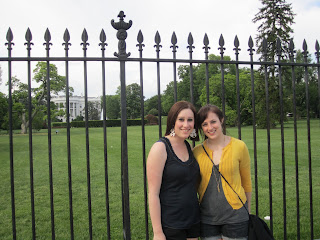 We got a bit of a late start on Saturday which worked out just fine since our first plans for the day involved lunch at Ben's Chili Bowl. 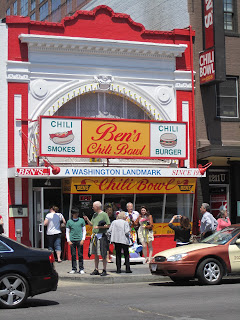 If you are a fellow appreciator of food, you can't really visit D.C. without making a stop at Ben's Chili Bowl for a half smoke. 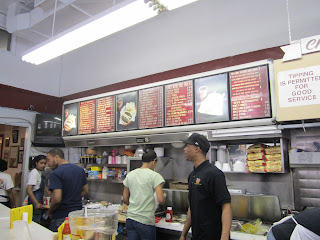 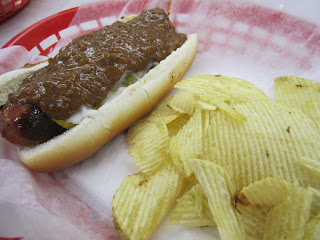 Shannon and I both enjoyed our half-smokes, though I would probably forgo the mustard the next time around.

We also liked this sign hanging in the kitchen: 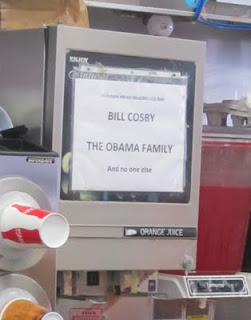 List of people who eat free at Ben's Chili Bowl
Bill Cosby
The Obama Family
And no one else.
Nice.
Following a stroll around the U-Street neighborhood (lots of good antiques shops!), Shan and I headed over to Georgetown.

TLC junkies like my sister might be shocked that Shan and I skipped Georgetown Cupcake (the shop featured on TLC's D.C. Cupcakes), but Timothy advised against stopping there and I'm glad we listened to him for two reasons:

1) Because this was the line at Georgetown Cupcakes: 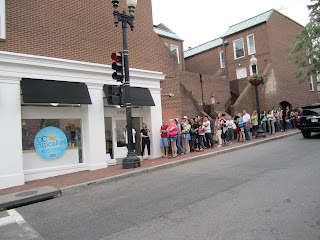 2) Because the place that Timothy recommended instead, Baked & Wired, was home to literally the best cupcakes I've ever purchased at a cupcake shop. Really.

What: Baked & Wired
Where: 1052 Thomas Jefferson Street NW, Georgetown
Honeys Heart: Cupcakes! All of them! 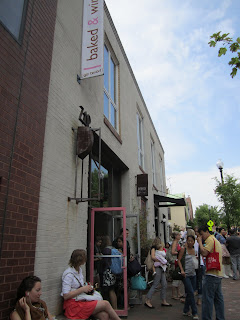 Also located in Georgetown, Baked & Wired offers several different types of baked goods, including over 20 different flavors of cupcakes, as well as premium coffee. (Get it- baked and wired?) 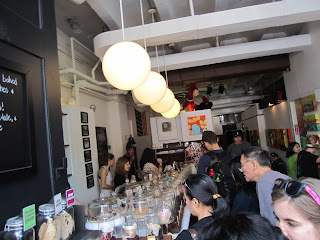 Love how they display their cupcakes! 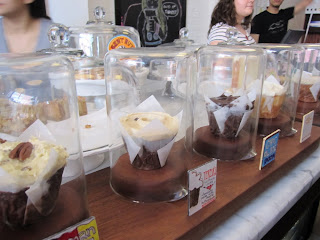 Shannon went with the Chai Tea Latte cupcake with vanilla cake blended with chai spices and topped with chai spiced buttercream. I tried the Menage a Trois made with with chocolate cake with cream cheese icing and raspberry filling. 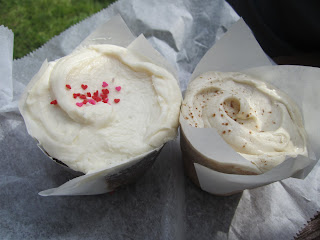 Both were heavenly. The cakes were flavorful and moist and Shannon and I both appreciated that while the frosting was delicious, there was only a thin layer of it compared to most cupcakes at cupcakes shops. That really allowed the cake itself to stand out which I personally think should always be the focus of a good cupcake. Basically, these were pretty much my ideal. Can't wait to take my mom to Baked & Wired in a few weeks to try out some of their other flavors! 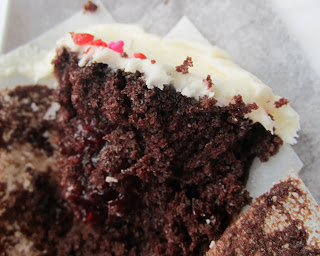 After enjoying our cupcakes by a river filled with boats pulled by donkeys (completely true), Shan and I continued our exploration of Georgetown, stopping frequently to proselytize about the joys of Baked & Wired over Georgetown Cupcakes and Sprinkles (sort-of true.) We're pretty sure we convinced a young couple that they should avoid Sprinkles at all costs but you never know about people. Sigh.

You would think that after finishing off our generously-sized cupcakes Shan and I would be all sweeted-out, but that was not the case. Especially when we eyed the sorbet and gelato at DolceZza. 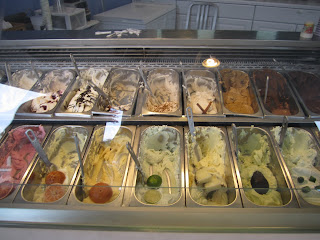 We decided to share a "small" Cucumber Vodka Mint Sorbetto. This little dixie cup was $5 or something ridiculous like that but it was so, so good. The cucumber and mint combo was very refreshing and the vodka helped bring out those flavors even more. My mouth is watering remembering it. 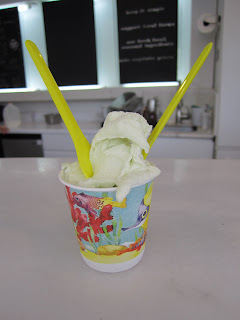 We walked around Georgetown a bit more (Shannon was kind of obsessed with it) before it was time to make our way over to Dupont Circle for dinner.

Another one of Timothy's recommendations, Cajun Experience is a (you guessed it) Cajun restaurant run by real live Louisianans. 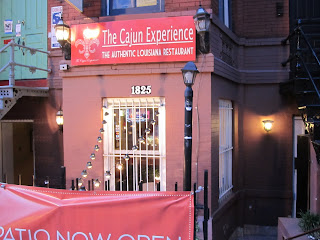 Shannon and I grabbed a seat on the back patio and ordered some Hurricanes to start. They were really sweet and not very strong... kinda disappointing. 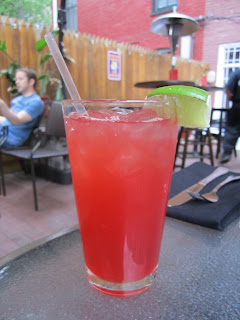 For our appetizers, we started out with the Hush Puppies ($4). Very tasty. 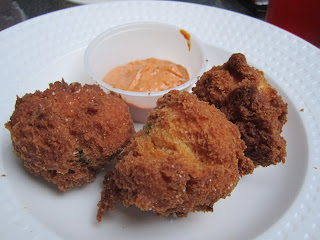 I also decided that I needed some Red Beans and Sausage ($6) served over rice. It was so good that I ate most of the dish. That turned out to be a problem later... 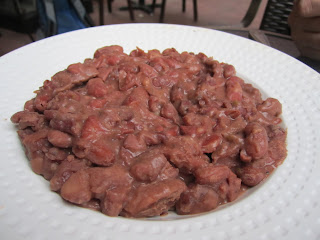 For her entree, Shan chose Shrimp and Grits ($17), which earned her stamp of approval. 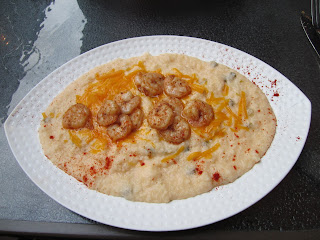 I went with the Jambalaya ($17), which was really flavorful and had the perfect amount of spice. Unfortunately, I was so full from the beans and rice appetizer that I could barely force myself to eat it. So frustrating! I tried my best but it just wasn't happening. Too bad we couldn't do doggy bags either. Boo. 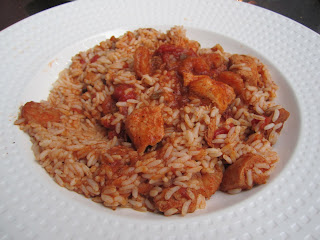 Following dinner, we hung out at an Irish bar for awhile trying to drink beer but sadly we were still just too full to really enjoy it. Bummer.

The next morning, we stopped for a quick brunch before heading to the Greyhound station for our endless 9-hour ride (not including the layover) back to Boston.

While the getting there and back part was definitely lame, overall Shannon and I loved D.C. and I wish we had gone earlier so there would have been time for us to make a second trip.

Also, did you know the metro stations in D.C. are like Space Mountain? 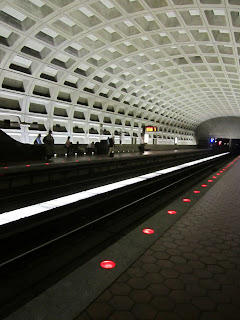