I have a new obsession: the Greek Yogurt Parfait with Spoon Sweets, Grano & Honey ($5) at Sofra Bakery and Cafe. 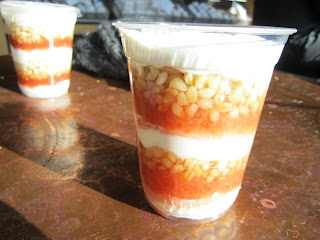 Seriously, it's so good! Let's break it down by layer.

Greek Yogurt- Greek yogurt is highly superior to regular yogurt because it's much creamier and thicker. Also, someone told me once that it's healthier for you. If I looked it up, I could probably verify whether that's true or not... but I'd rather just go on blissfully thinking this stuff is good for me, just in case it's not.

Spoon Sweets- Spoon sweets refer to the traditional Greek custom of greeting visitors with spoons filled with sweetened fruit or vegetable preserves as a symbol of hospitality. At Sofra, they don't let the pieces of fruit break down completely so the spoon sweets are more like a compote than a jam. Delicious!

Grano- I've been talking this parfait up to a lot of people, and usually they're right there with me until I get to this component. Grano is a type of grain known for its chewy texture. That weirds some people out, but trust me, the grano is really what makes this parfait worthy of obsession. The yogurt and spoon sweets would be plenty fine on their own, but it's the satisfying chewiness that the grano adds to each spoonful that really makes this parfait so amazing. 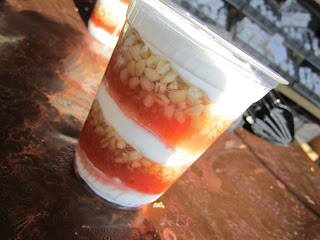 Okay, this is making my mouth water. Moving on...

Shannon and I also tried Sofra's take on a maple donut. 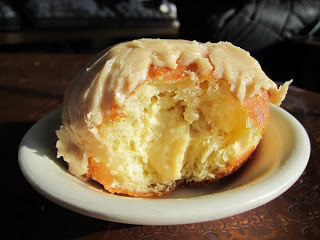 The glaze was a little too sweet for me but the donut itself was light and fluffy and the cream inside, heavenly.

Sofra has plenty of other dishes and treats to offer as well. 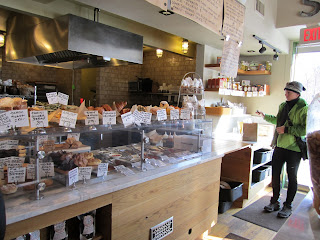 There's the mezze bar where you can load up your plate with choices like beet tzatziki, lentils with pomegranate & greens, and Moroccan goat cheese... 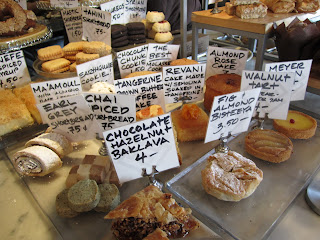 Or you can sample some of Sofra's many tasty pastries. (The chocolate hazelnut baklava is just as good as it sounds.)

Sofra also serves stuffed flatbreads and traditional Mediterranean dishes like shawarma (similar to a gyro) and moussaka (which you might remember as a former obsession of mine.) 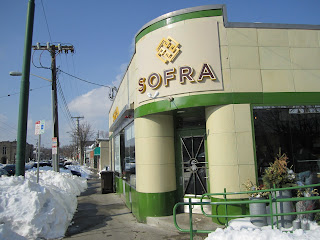 The only downfall to Sofra is that it's located about an hour from my apartment by bus. Sad.

But I'm probably still going to try and convince my roomie to go with me again this weekend... Told you I was obsessed.
Posted by Kelly at 5:34 PM