Anna and Erica's sister Courtney was in town last weekend so in her honor we rallied the girls and signed up for Drink and Hunt's 80's Ski Hunt. 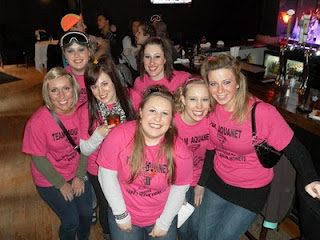 Do you know about Drink and Hunt? They're a relatively new company (I think they started up last summer) that sponsors themed scavenger hunts/pub crawls around Boston, New York and San Francisco.

We didn't really know what we were getting ourselves into when we signed up (somehow we all missed the FAQ page), but we ended up having an amazing time.

The hunt works like this:
Each team has a special webpage that you access via smartphone. The page gives you a one sentence clue about what bar you should go to next. Can't figure it out? Ask for a hint and you'll get a second clue as well as 5 minutes added to your total time. Still stumped? Ask for another hint and you'll get the address... and another 5 minute penalty.

Once you get to the correct bar, you have to show that you've made it by answering a question like "What is the first name of the politician in the black & white photo by the bar?" or "What is the first word of the third line on the plaque by the window?" After you answer the question, you have 5 minutes until you're given the next clue.

We used those 5 minutes for sharing pitchers and doing tequila shots but you can also pass the time by answering 10 trivia questions on your webpage to earn extra points. Our questions were appropriately 80's themed.

Teams can also get more points by posting on Drink and Hunt's Facebook page and tweeting photos of the team with people like a bartender and someone in colonial dress.

Here's a recap of our Drink and Hunt experience:

We started our day at Erica's for an intense 80's hair and makeup session. 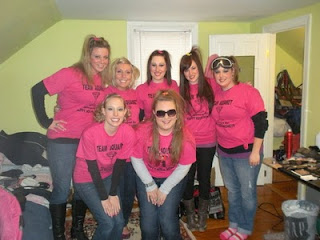 Check out our team shirts (and my out-of-control side pony): 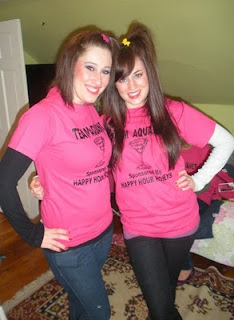 We met up with our fellow hunters at The 21st Amendment, where there was time for a pitcher and some appetizers before we were read the rules and sent out onto the streets. 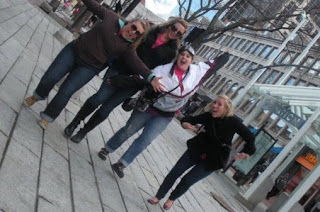 Our first stop was Jose McIntyre's and then we were off to Mr. Dooley's.
Of course we enjoyed the drinking, but getting to the bars was part of the fun too... 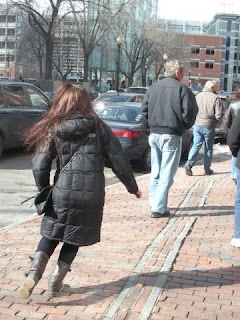 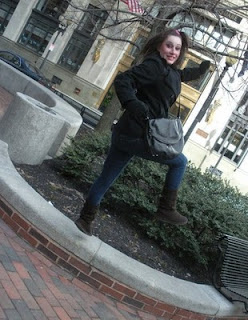 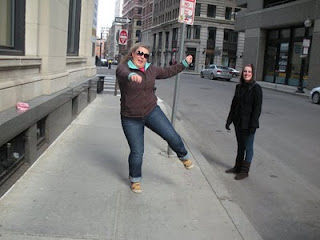 Heel click?
Right after Mr. Dooley's though, we began to encounter some setbacks.

Katie W's super cute flats starting acting super evil and we were forced to make an unscheduled pit stop at CVS for bandaids and socks. 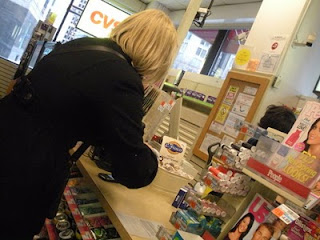 Our hunt was further delayed when we/just me decided it was necessary for Courtney to play Wham!'s "Wake Me Up Before You Go-Go" on her phone while I danced in the aisles. 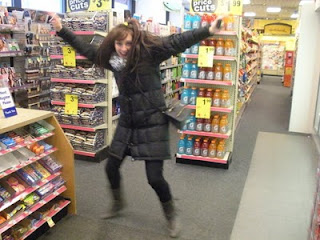 My bad guys.
More trouble came when, even though we had used all 3 clues and had multiple phone convos with Drink and Hunt, we still couldn't find the damn Kinsale. Seriously though, addresses are hard sometimes. Especially when you've been pounding beer and shots of tequila all afternoon...

We finally found it, but by that point, we were pretty much done. The next bar we were supposed to go to was Sail Loft (which we had only figured out thanks to a couple we met at the bar) and walking all the way from Government Center to the North End seemed impossible.

So we called back Drink and Hunt and demanded they tell us where the final bar was. We were disqualified, but at least we could finally sit down and enjoy our beer without the threat of the clock looming over us! 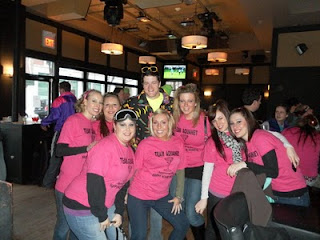 Team Aquanet at The Grand Canal, our final destination.
So yeah, by the end the whole scavenger hunt schtick did get a little old, but running around Boston, throwing back a few pints with friends, solving clues and being introduced to new bars we might have otherwise missed definitely made the hunt worth it.

In fact, we had so much fun we're considering joining Drink and Hunt's upcoming St. Patty's Day hunt. See you there?
Posted by Katie @ Happy Hour Honeys at 1:55 PM