For my last night in San Jose before the big move to Boston, I decided it would be fun to hit up a happy hour with all my friends from home...so basically Nick and Bears.

We planned on trying Smoke Tiki Lounge, which had caught my eye when I was dropping off my boxes at the Greyhound Station next door. That plan was quickly aborted though thanks to the sketchy patio and the fact that we sat around for a good 5 minutes without being approached by a waitress.

We tried Agave Viejo instead, but the service was not much better. We waited at least 10 minutes before the manager finally sent a waitress over and throughout our time there it was like pulling teeth to get our food and drinks within a reasonable amount of time. 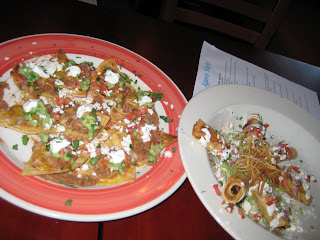 Despite the poor service, the prices were pretty good. $4 for house margaritas and we also went for the $4 nachos and $4 chicken flautas. Definitely not anywhere close to authentic mexican food but it wasn't bad. But then there was our second round of margaritas that came with extra sour mix (homemade at least) and no tequila. Big problem. We asked the bartender to add some of the good stuff and he did, but he was not happy about it. So all and all, I would steer clear of Agave Viejo in the future.

Also, you probably want to see a picture of the awesome cake we made for dessert. Piping by Bears (she's a pro). 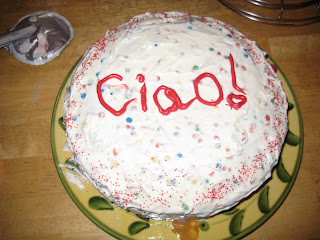