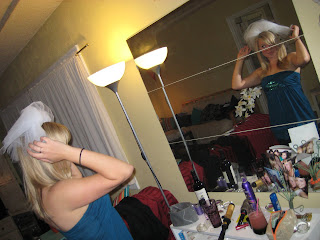 Ok, not really, but when you're on a budget you gotta get creative. I'm not quite sure who's to blame for this great idea but for a while now we've been talking about throwing a bachelorette party. None of us are engaged or anything but we were pretty sure that bachelorette parties are definitely one of those events that warrants lots of free drinks. Turns out we were right.
In preparation for the big night, I stopped at Fabric World (my new favorite place) for some white tulle and, with the help of an old headband, whipped up a pretty decent looking veil. Of course every frugal girl knows that pre-gaming is a must so we went into greyhound mode and then headed out for our night on the town.
Greek Cuisina was the logical choice for our first stop and we were not disappointed. One look at Kelly's veil and in no time there was ouzo pouring and plates flying. After the ceremonial embarrassments (do you know how to open wide? no? your husband won't like that!) we headed to the bar for our first round but hit a bit of a snag when the bartender informed us that the first thing they learn at bartending school is to be suspicious when a group of girls have ids from all different states. I think what she probably meant was that they teach you to be suspicious when a group of girls who look 14-18 years old try to buy alcohol from you. Whatever, it's not our fault we have good genes. Anyway, after Dena's insistence that the bartender "black light the shit out" of her id, we finally had the bartender convinced that we were actually 21 (22 in some cases!) and were rewarded with the "bachelorette shot." 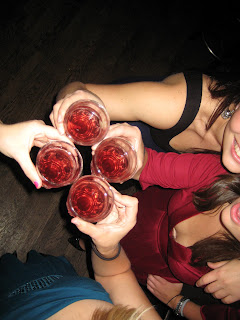 There was a great dj upstairs and a group of men kindly decided to treat us to a few more drinks so we ended up staying at Greek Cuisina for quite sometime before we decided to make our exit. On our way out, we made a few more friends who proved to be very entertaining. While Kelly was performing all sorts of circus tricks and receiving free tshirts on one end of the table, I was busy playing matchmaker (for myself?) with another couple. I learned that their son Daniel is into modeling and lives in Berkeley. I also learned that I can lie pretty convincingly when under pressure (ugh! I hate Texas! Oh, you're from there? What I meant is I hate Galveston. I love the rest of Texas). I'm pretty sure they were more than a bit tipsy too.
Our walk from Creek Cuisina to the Kels area is a bit hazy for all of us. Luckily we have pictures with random girl, random guy, random thugs, cute-ish firefighters with truck and disgruntled policeman in cop car to help clear things up. 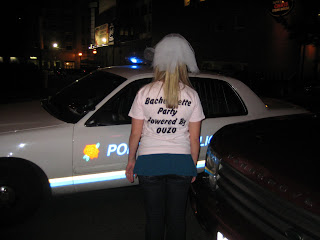 Much to our disappointment, Kels and the like do not let bachelorette parties in for free (at least they don't let intoxicated girls claiming to be getting married in for free) so we headed to Berbati's. As per usual, we made lots of new friends (Dena in particular) and managed to score one final drink before we called it a night.
All in all, the four of us spent a total of $8.29 on veil supplies and two tic tacs (two for one...nice negotiation Kel). Pretty darn frugal if you ask me.
Posted by Kelly at 4:39 PM