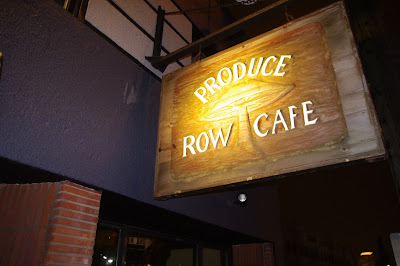 Typically when Joe and Adam venture off to HH I stay home or have a HH of my own to attend, but recently the three of us tried out Produce Row Cafe (per Joe's suggestion) in the Eastside Industrial area. I'm glad I went though because we did receive one of my favorite group nicknames ever, "the power trio." I'm assuming this was because we sat at the bar and ordered a lot of food, because I didn't even order a drink! 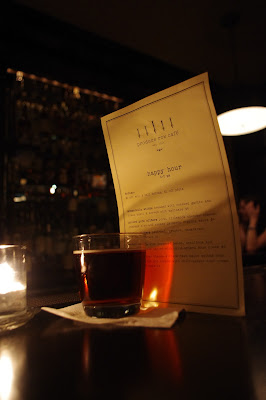 I think what originally caught Joe's eye was the whiskey and beer pairings on their menu, but what caught mine was the food selection and renovated restaurant at this increasingly trendy location. The bar has 4 areas with slightly different vibes. The bar area has a large bar and communal style dining tables. Behind that is a lounge-y area with sofas, which looked nice to enjoy a drink, but incredibly uncomfortable to eat at as it required eating with your plate sitting in your lap. In the back corner there are booths and outside has a covered, heated patio area. It was BUSY when we got there so we decided to take a seat at the bar. 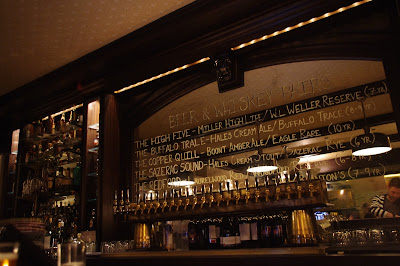 Adam and Joe both ordered, and greatly enjoyed, beer and whiskey pairings ($6, $7) and I stuck with a water. I was nursing a cold and decided to be responsible, but the drink menu looks pretty good and I wish I had ordered "The Elder" ($8.) I suppose that's a reason to return. 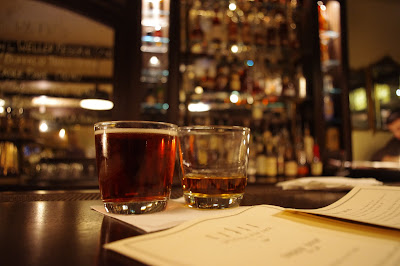 On to the food selections. Adam and Joe both ordered the Pulled Pork Sliders ($6 - they're so matchy matchy) while I opted for the Ruben Sliders ($5). 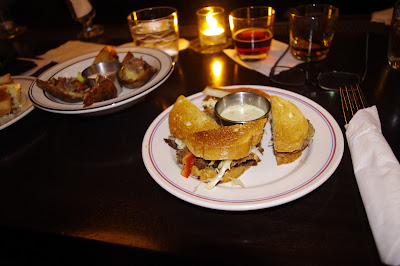 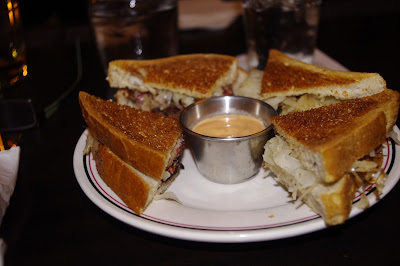 My "sliders" were bigger (since it was essentially a sandwich cut in triangles), and I think better, though both were absolutely satisfying. Of course since I didn't order a drink I had to order extra food to make my time there more interesting, so I also got a side of the Baked Mac and Cheese ($4.50). It was hearty, but I have to admit I'm a sucker for just plain old noodles and creamy cheese (like at Davis Street Tavern) so this wasn't my fav. 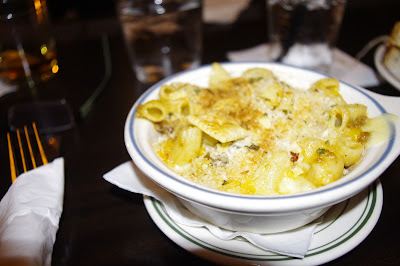 Finally, probably one of the tastiest, gilty pleasures of the night was two orders, yes two, of the Potato Skins ($4) with peppered bacon, scallions, cheddar cheese and cili-spiked sour cream. They were awesome. 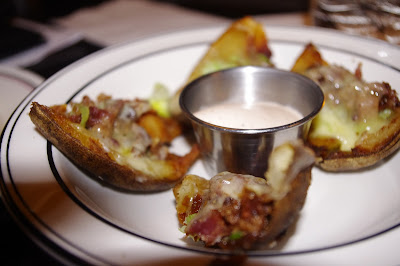 Since I didn't try any drinks, and the regular menu looks good and fairly priced I'll likely have to return. I have recently talked to a Portland native who has just returned from 2 years in Korea and was sad to hear that this Portland establishment has changed and no longer offers what sounds like some of the biggest sandwiches EVER. I guess I'll have to get his thoughts after he goes back and tries their new menu...a real compare and contrast. 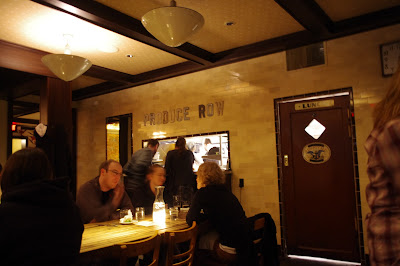