Kel and I are big on drinking games. I mean, not that we need an excuse to drink, but they are a great way to get a room warmed up.

We have our favorites from college that we still play occasionally- King's Cup, Asshole, and Hot or Cold- but within the last year or so, we've been introduced to a few new games that have quickly become part of our party repertoire.

Let's learn about them, shall we? 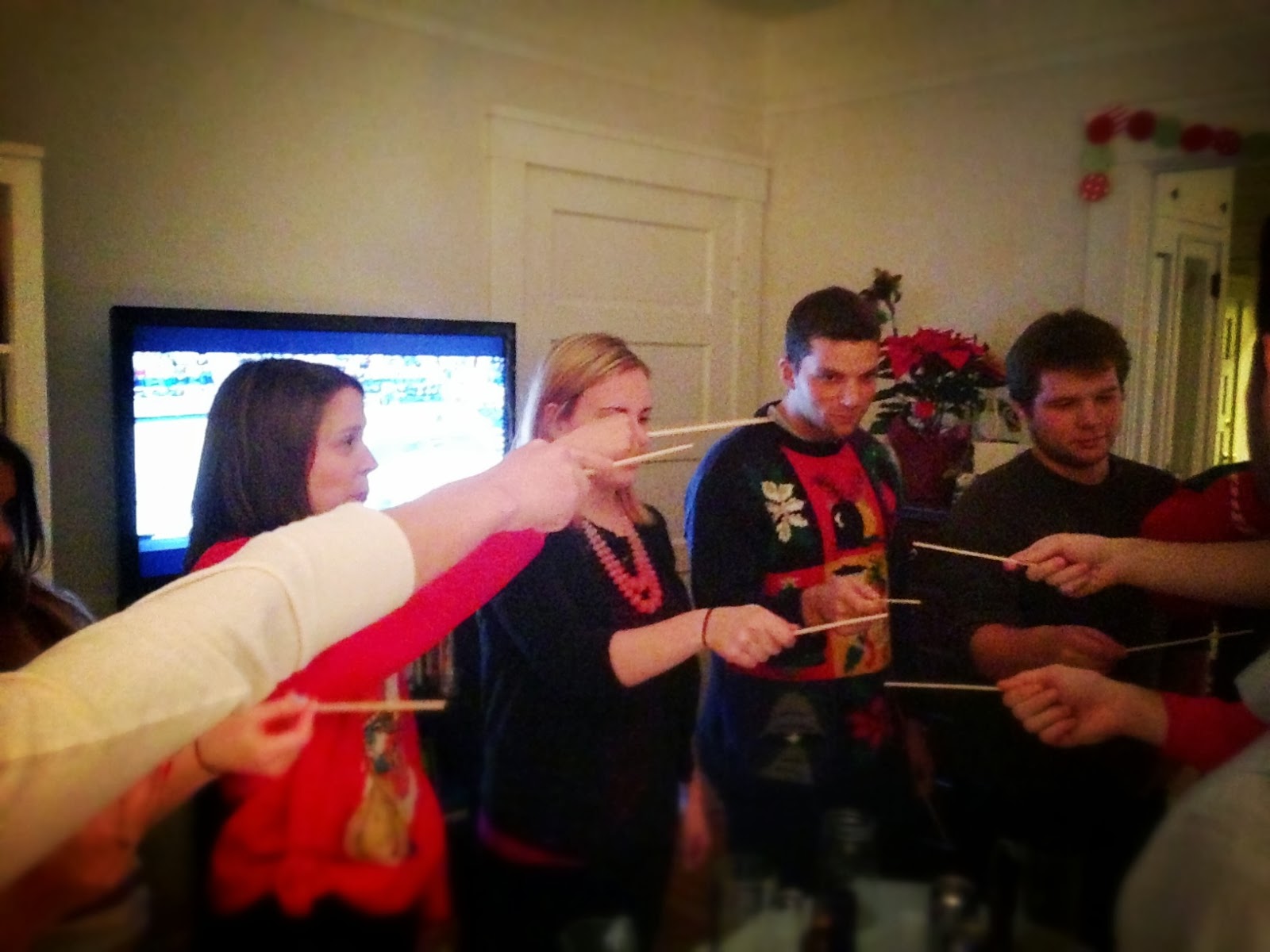 Dana and Eric learned this one while they were teaching in Seoul a few years ago. We played it for the first time at Sushi/Sake Bomb/Christmas Sweater night last year and it was so much fun.

Where to Play:
At home

How it Works:
1) Players stand around a table with drinks in front of them.
2) Together everyone chants "Kai Bai Bo!" (or "Rock Paper Scissors!" if you want to do it the boring English way).
3) On "Bo!", everyone points their chopstick at someone else.
4) The person who is "it" shouts a number. Something between 1 and 10 is preferable.
5) Follow the path of the pointed chopsticks from the person who is "it", counting to the number.
6) The person you land on has to drink and now they are "it."

Bonus: You kinda feel like Harry Potter with all that chopstick pointing. I loved it. (Obvs).

This game comes from Lauren (read about her recent trip to Portland on her blog here) and it's pretty simple. It's best played in a crowded bar with friends who like to have a good time and who aren't going to be nincompoops (not that you would have friends like that anyway...).

Where to Play:
At a bar

How it Works:
1) If you buy someone a drink, you get to choose how they "die."
2) The more public, potentially embarrassing, and creative their "death" the better.
3) The drinker must act out their "death" before they can drink their drink.
4) If you bought multiple people drinks, feel free to combine their "deaths." It's more fun that way.

Confused? Here are some example "deaths" from a recent game played at Rontoms (their patio is the perfect "death" stage, btw).

Doug starts to get sick and slowly turns into a zombie like on The Walking Dead. He tries to attack everyone at the table until Lauren finally shoots him in the head.

Katie and Kelly start lancing from opposite ends of the bar. They run towards each other. Katie knocks Kelly from her horse and Kelly dies, but not before tripping Katie, causing her to fall as well.

Lauren is wandering all over the bar, holding up her phone trying to get service. Right in the middle of the bar, she is electrocuted by a lightning bolt and dies.


The Game from Pumpkin Beer Night

So this one definitely needs a new name (can you guess where it was made up?) but we'll get to that eventually. This game is best with a group that holds their liquor well because there are shots involved. We did shots of SinFire (less syrup-y than fireball but still very festive, you should try it) on Pumpkin Beer Night and half shots of tequila at Rontoms.

Where to Play:
At home or at a bar

How it Works:
1) The dealer places a card face up in the middle of the table.

2) The person to the dealer's left must guess if the next card will be higher or lower. What happens next is based on the card and their guess:
- If they're right, no one drinks
- If they're wrong, they must drink
- If it's the same card, they must pick someone to "Rock, Paper, Scissors" with. The loser drinks.
- If it's a face card, they get to choose someone to drink (in addition to drinking themselves, if they were wrong).
- If it's an ace, they must take a shot.
3) Play continues around the circle until until the deck is finished.

This game is really just the best when combined with Kill Your Friends because somebody's got to be buying all those shots and the deaths provide a nice break from all the drinking. Fun!

ALSO: Kel and I love to have a good time but we ALWAYS take a cab or walk home after we've been drinking, especially if we've been playing these games, and you should too. K, bye!
Posted by Katie @ Happy Hour Honeys at 4:06 PM