This week has been my spring break and it's my last one ever. (Almost done with grad school, woot!)

In honor of the occasion, Nick and I decided to make a weekend trip to Texas—Austin and San Antonio in particular.

I chose Austin because I've been hearing good things about the city for a while now. Austin has long been known as the "live music capital of the world", but I've also heard that Austin has quite the bustling food scene, similar to Portland's. San Antonio made the cut because it was only an hour and a half drive from Austin, so why not check it out too?

Nick and I arrived in Austin on Friday afternoon and, after checking into our hotel, immediately headed out to explore the nearby University of Texas neighborhood.

Neither of us had eaten lunch, so we bee-lined for Torchy's Tacos.

What: Torchy's Tacos
Where: 2801 Guadalupe St near UT
Honey's Heart: The Democrat and Green Chile Queso

Torchy's Tacos started out as a food trailer and has since expanded to six locations in the Austin area. The menu features a variety of tacos as well as fajitas, burritos, chips and dips. 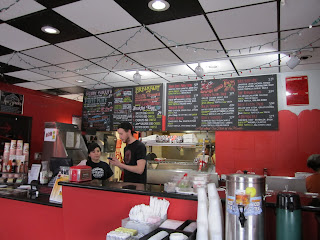 When Nick and I walked in, we noticed that almost everyone had queso on their table, so we decided we needed to try it too. 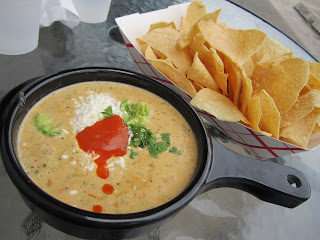 The Green Chile Queso & Chips ($4.95) is served with Torchy's homemade chips and is topped with guacamole, queso fresco, cilantro and Diablo sauce. The queso had a nice spicy kick to it and I loved the generous scoop of guacamole hiding in the cheese.

Nick and I also ordered two tacos each which turned out to be a lot more food than we expected (think Por Que No? tacos x2). 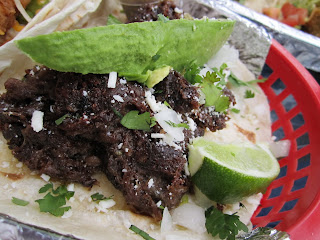 Our favorite of the four was The Democrat ($3.75) with shredded beef barbacoa topped with avocado, queso fresco, cilantro, onions, and tomatillo sauce. The delicious bbq beef was perfectly complimented by the bright, fresh avocado. Tasty. 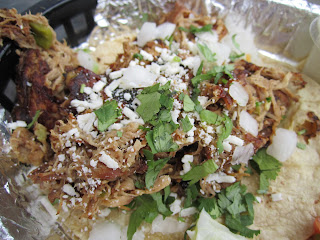 Our next favorite was the Green Chili Pork ($3.25) made from slow roasted pork carnitas simmered with green chiles and topped with queso fresco, cilantro, onions and tomatillo sauce. Great execution of a traditional taco. 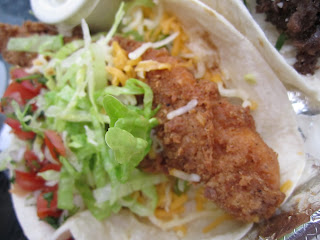 Then came the Trailer Park ($3.25) with fried chicken, green chilies, lettuce, pico de gallo and cheese with poblano sauce. Good, but not the authentic taco I prefer. 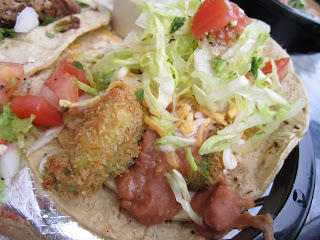 Last on our list was the Fried Avocado ($3.25) with hand-battered fresh avocados fried and served with vegetarian refried beans and topped with pico, lettuce and cheese. This was the taco I was most excited to try but unfortunately it didn't deliver. The fried avocado was nice, but combined with the beans there was just too much mushiness with no crunch to balance the texture.

So full when we left!

After wondering around the UT area, Nick and I decided to head over to E. 6th Street, the nightlife mecca of the city.

One thing I couldn't get over was how many patios there are at the bars and restaurants in Austin. I love that. 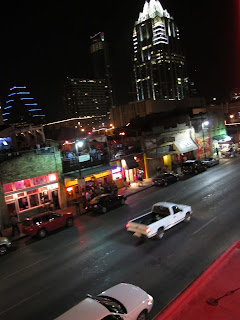 There were quite a few bars with roof-top patios on 6th so we chose one at random and found ourselves at Iron Cactus. 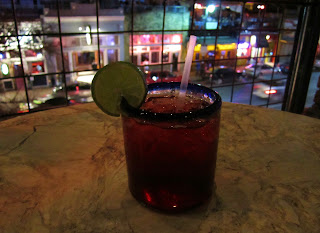 I had La Muerte ($9.50) with Hornitos Plata Tequila, Patron Citronge and pomegranate juice. It tasted watered down but the roof-top patio setting almost made up for it.

Next, Nick and I decided to investigate the The Chuggin' Monkey. 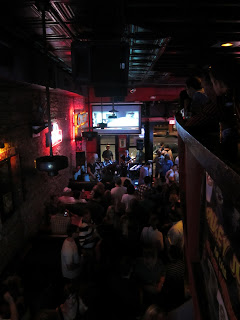 That night, the bar was hosting an awesome all-girl cover band called Guilty Pleasures. Wish they would come to Boston...

By the time we left The Chuggin' Monkey a few hours later, 6th street had gone from a normal street to this: 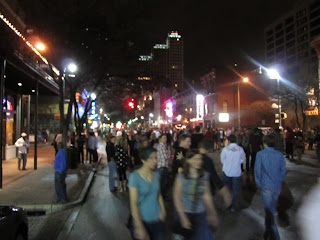 I'm not sure if they always shut down 6th to cars or if it was like that because we were there for Mardi Gras weekend, but it was pretty crazy. Kind of like a mix between the Las Vegas strip and DP at UCSB.

We hadn't eaten anything since Torchy's (ok, we had chips and salsa at Iron Cactus, but that doesn't count), so we decided to partake in a few of the many food trailers that line up along 6th starting around 8pm.

The Best Wurst is an Austin institution as far as food trucks go having been around for over 20 years. 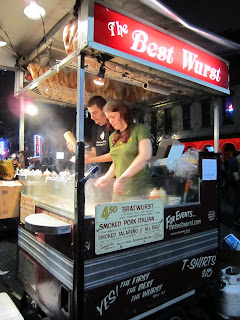 Nick and I shared a Bratwurst ($4.50) made with German-style pork sausage double ground with nutmeg and pepper and topped with grilled onions and spicy mustard. 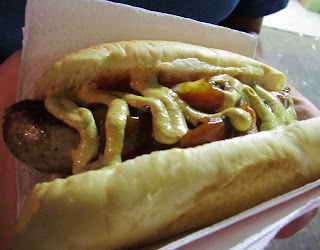 Of course, no night is complete without dessert, so we had to stop at Doc Munchies too. 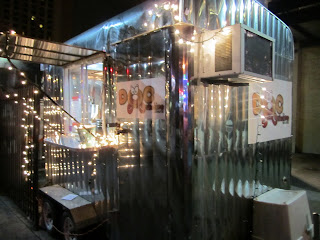 We didn't exactly get off to a good start at Doc Munchies. I always like to ask the server or vendor what they recommend and I expect them to provide some sort of opinion or information. When we asked the guy at Doc Munchies what he recommended, he said he didn't know. We then asked what the customer favorite was. "They're all good," was his response. Ok...

So we decided on our own to try the Salted Caramel Donuts ($3.50) and, let me tell you, it was a great choice. 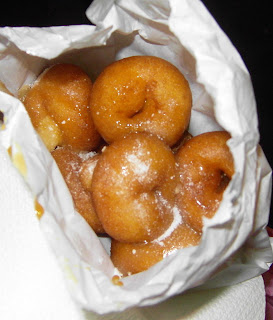 They were amazing. Light and fluffy with powdered sugar and drizzles of sweet and salty caramel. It's probably a good thing I don't live in a place where these are available every weekend because I would definitely eat them all the time. Great way to end our first day!

Also, if you're interested in finding out more about Austin's food trailer scene, check out foodtrailersaustin.com.
Posted by Katie @ Happy Hour Honeys at 12:10 PM