The Portland marathon was on Sunday meaning sober September (plus a few days of October) has officially ended and Mary and I are back in training (of a different kind). We celebrated our accomplishment and return to alcohol at Elephants Delicatessen. I've been craving a margarita since August 31st when I last had one (at Elephants of course) and lucky for us, Steve was our bartender. 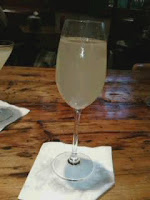 Elephant's bar has two bartenders, Kelly and Steve, mentioned in my first Elephants post in April as being slightly condescending. Now you might think that since Kelly and I share the same first name he may be my favorite, but you would be wrong. Between making fun of Katie's and my slight tipsiness after two margaritas, commenting on my tendency to order three margaritas every time I'm at Elephants in front of Katie's mom, and not putting adorable orange, lime, and lemon pinwheels in my three citrus margarita, bartender Kelly has slowly but surely rubbed me the wrong way. Don't worry though, Steve makes up for it. Not only does Steve put the pretty fruit pinwheels in my margaritas, he offers lessons on gin (he is responsible for converting me from a strict vodka drinker) and makes sitting at the bar fun and entertaining. 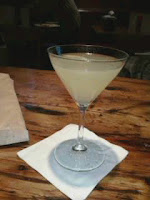 Last Monday Adam, Mary and I arrived promptly at 5pm for the beginning of their happy hour, which lasts until 7pm, and ordered 3 three citrus margaritas. Our drinks were accompanied by happy hour food orders of aardvark chicken strips and fondue, as well as a crispy cheesy quesadilla from the grill. Since we have been out of the game a while we decided we should venture from the usual and try some of the other signature cocktails, and we're glad we did! We followed our margaritas with an Emlit, a cucumber muddled beverage with lime juice, mint, and gin served up, and Rosemary's Baby that delightfully combined gin, peach liqueur, rosemary, and lemon juice topped off with champagne. As Adam said, he'd like to marry that drink. We were so impressed with Rosemary's Baby that we order another while we enjoyed our homemade Ding Dong, oatmeal cookie, and chocolate chip cookie. 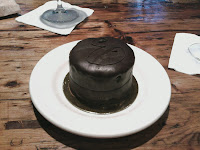 Finally we decided we should call it quits OR order a celebratory shot! We went the celebratory shot route and challenged Steve to create an awesome concoction that maximized alcohol content and tastiness. He definitely did just that! Our shot combined house made watermelon vodka...thanks to Kelly, it was good, I'll give him that...and fresh blended raspberries, delicious. 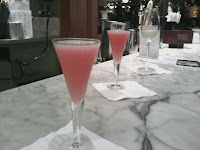 Is it wrong that Mary and I went back the next night?

Mary and I definitely went back the next night and enjoyed another margarita, which was my fifth after having attended happy hour at Oba! and 50 Plates. Kelly made a surprise appearance and I was just tipsy enough to tell him why he maybe wasn't my favorite Elephants bartender, which resulted in an opportunity for him to prove me wrong.

So I showed up at Elephants for the third time this week on Thursday where Kelly rivaled Perry's on Fremont for the best lemon drop (I just LOVE Perry's though), but won me over with a raspberry, beet, ginger, vodka cocktail. It was fabulous. While I sat at the bar I listened to Kelly's regular clients rave about his drink making and he remembered almost everyone's name who had been to his bar before, pretty impressive. Kelly and I may have started off on the wrong foot, but I will admit he is a great bartender and he sure knows how to create a delicious cocktail. You definitely can't go wrong at Elephant's bar!
Posted by Kelly at 12:22 PM